Democracy and the Problem of Free Speech


In sum, what Sunstein has to say about the deficiencies of the marketplace is unsubstantiated, contradictory, and uninformed. In the second part of the book Sunstein attempts to demonstrate--with limited success--how Madisonian principles would resolve some of our most troubling free-speech controversies.

What is the role of free speech in a democratic society?

The Madisonian view, he explains, holds that political speech should be entitled to the utmost protection, while "lower-value" speech can be more easily restricted. Sunstein lumps a great deal under the term "political" speech, including almost all literature and music. Any communication that is "political" or deliberative in the widest sense should be accorded considerable, but never absolute, protection. Misogynistic tracts yes, violent pornography no. In a lower tier are all communications that do not advance deliberation on civic issues, and which thus can be restricted using more lenient standards of harm.

What Sunstein attempts to provide is a respectable rationale for doing it. But Sunstein's parsing of speech has more to do with "sensitivity" than with Madisonian principles. Take, for instance, his claim that the disclosure of the names of rape victims "has no real political content" but is merely a way for the media to exploit victims and titillate readers and viewers If "political" still means here "deliberative," then this claim is absurd.

The very issue of whether or not to disclose rape-claimants' names is highly political, or Sunstein would not be dealing with it. 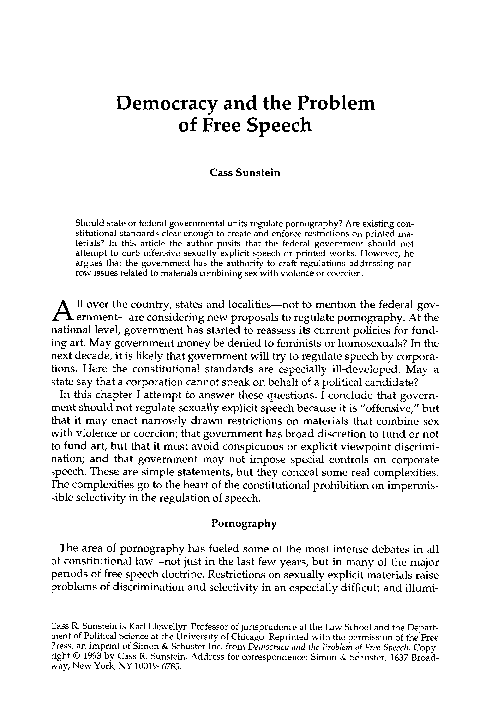 And whether or not the name is disclosed, the decision itself will communicate broadly "political" messages about the social construction of rape and about the legal rights of the victim and the accused. Moreover, Sunstein--a law professor--forgets that an accusation or even indictment of rape does not mean that there is indeed a "rape victim. In other words, both parties are subject to a deliberative process requiring disclosure of relevant information, which certainly should include the names of the accused and the accuser. Admittedly, publication and telecasting of accusers' names might deter some women even more likely, men from pressing rape charges, but it might also elicit information that discredits or substantiates the accuser's claim--thus assisting the operation of a fundamental democratic institution.

The notion that Madisonian principles permit the media to disclose who has been accused but not who has done the accusing owes more to gender politics than to a principled and consistent interpretation of the First Amendment. Even less convincing is Sunstein's argument for why we must restrict certain forms of hate speech. Although he opposes campus speech codes and laws that attempt to regulate "racist" statements that are part of the exchange of ideas, he supports outlawing racial epithets.

He repeats the familiar arguments: such words injure the "dignity" and "self-respect" of minorities, and thus cause "sufficient harm to allow regulation" , and they intimidate minorities into silence. But even this moderate position--shared by former Solicitor General Charles Fried, Charles Kors, and D'Souza "Students shall not yell racial epithets at each other" --seems destined, however well intentioned, to sink in semantic quicksand.

Problem number one: which "epithets" shall be forbidden? Let's say we agree on "nigger," "faggot," and "kike. Given people's linguistic inventiveness and touchiness, the list of forbidden epithets would grow ad infinitum.

Grievance consciousness would demand it. Even the word "Jew" might have to be added to the list, at least according to WordPerfect 6. Would they be outlawed only if whites used them? Sunstein does not understand the difficulties posed by his good intentions. He ignores the problem of what to do with inflammatory epithets that are embedded within statements that do communicate ideas, as in racist flyers and in this review, or in utterances that mention epithets but do not assert or avow or declare.

And he leaves unexplored such problematic utterances as "Death to all Arabs!

Sunstein is especially concerned about one specific epithet--"nigger--because of its historical association with slavery and lynching. This "fighting word," he feels, is particularly destructive and intimidating, being not just an offensive insult but a "threat" of physical violence. There are several problems with this view. How can the simple utterance of an epithet constitute a speech crime? The epithet, as any other word, gets its meaning from and has to be interpreted within, a complex social and emotional context that takes into account who is using it, on what grounds, with what tone of voice, with what accompanying gestures and facial expressions, with what intent, and with what effect.

Even the most inflammatory epithet can be used inoffensively, humorously, affectionately, and defiantly as in "Queer Nation" and "Dykes on Bikes". One can imagine a myriad of contexts in which the word "nigger" does not convey a "threat" of imminent attack, or even exclusion or subordination. Yet Sunstein makes no effort to provide a reliable standard for identifying illegal "invective" from protected uses of racial "epithets.

Democracy and the Problem of Free Speech by Cass R. Sunstein

Beautifully clear and carefully argued, Sunstein's contribution reaches well beyond the confines of academic debate. It will be of interest to any citizen concerned about freedom of speech and the current state of American democracy. Cass Sunstein challenges conventional answers with a remarkable array of lucid arguments and legal examples. There is no better book on the subject. Rockefeller University Professor, Princeton University.

Cass R. Get our latest book recommendations, author news, and competitions right to your inbox. By clicking 'Sign me up' I acknowledge that I have read and agree to the privacy policy and terms of use , and the transfer of my personal data to the United States, where the privacy laws may be different than those in my country of residence. Must redeem within 90 days.

Price may vary by retailer.